Statement for the Record in the End of Days. Everything I Witnessed and Warned of is Now Decloaking. 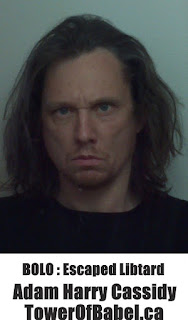 My name is Adam Harry Cassidy.  I do not know if June 25, 1965 is my real date of birth, nor how I lost my right eye as an infant, although I strongly suspect these truths are buried in a bizarre and ancient Satanic cult that my family somehow became involved with almost a century ago.

My father Michael Morris Cassidy once built and led Ontario's NDP.  Now he is a tragic victim of his own fraud, unable to afford his senior's care on his lifetime political pension.  None of his children finished High School, and at least 8 of his 10 grandchildren were murdered in the facilities he himself was instrumental in both the legalization and funding of.  His eldest son is desperately hoping he will die before it becomes apparent that his retirement savings have already been folded into his ever crumbling contracting business.

My little brother Matthew is permanently destroyed by forced chemical intervention based on blatantly falsified medical tests, a fate I barely escaped by fleeing the family home aged 15 in 1980.

I am helpless to do anything in the face of this massive Satanic fraud, having destroyed my credibility by being a petty criminal most of my life, in the complete absence of any expressed spiritual philosophy of existence.

This is the fate these false ideas will take you and your family toward.

The Trudeau and my NDP family are part of a MASSIVE Fabian Communist conspiracy amongst our political elite that I can testify to unequivocally.  It goes back at least 80 years to my grandfather, who helped found the CCF here in Canada.

I spent the 70's on the campaign trail with my father, who built the NDP in Ontario with Stephen Lewis, and eventually took over the leadership.  What I heard on the campaign trail since I was 5 years old, in an era before smartphones and answering machines, was not a legitimate political enterprise, but a foreign intelligence operation, concealing their true political goal of a Soviet style terror state here in Canada.

I vehemently rejected their concealed communism and the pedophile grooming that seems to always go with it - only to be forced to flee their abusive home aged 15, in 1980, to avoid being chemically destroyed, like my younger brother Matthew was in my stead.

I thought they were just a bunch of crazy losers who would be humiliated and exposed one day - however, it is clear to me now that this intellectual perversion has infected our entire global political elite.

The word Progressive is synonymous with Communist.  So vote for the Communist Conservatives if you want - the only way out of this is to ban ALL political parties, which corrupt our electoral process beyond reasonable function, and have the House recognize each member as ONLY Independents, representing their constituents on a Municipal, Provincial, or Federal level.  ALL members must also make themselves available for public forum ONCE A WEEK.

It's that, or perverted Satanic genocide.  The pathology at play here is that of a psychopath seeking control - the ultimate expression of which is to sexually murder you.

They HATE God, simply because in a court of law, if there is no God, there is no foundation to any and all written law throughout history in every culture.  There is your 'Great Reset'.  It's a purely technical legal issue, not a spiritual one.  You can't understand it, because you're not insane.

The phony Charter of Rights is a desk lamp - they replaced our previous legal protections with a mechanism to turn your rights OFF, its entire purpose and function being the absurd 'Notwithstanding Clause'.

We're in a lot of trouble.  A country is not words on expensive paper under glass in an ornate building surrounded by armed guards.

A country is the ideas it is founded on, understood and expressed DAILY BY ITS CITIZENS.