The Modern Tower of Babel 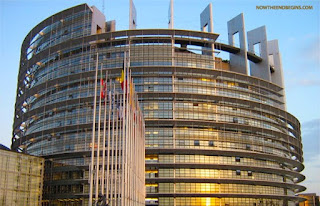 The Modern Tower of Babel is stripping us of our ability to communicate.  While the ramifications are myriad and mindbogglingly complex, the simple reality that is sending us spinning into oblivion is easily described.

While the Tower of Babel in the Bible is seen as God giving everyone a different language ie different words for the same ideas, the modern manifestation of this is to distort our language until we all have different ideas attached to the same words.

If we cannot agree on the meaning of our own language, we will collapse into chaos and ultimately - and very quickly - despotism.

This is in line with the motivations and pursuits of those who built the NDP in Ontario, whom I listened to throughout my childhood discuss their Fabian Communist convictions, how to conceal and rebrand them as 'Socialism', and their then developing approach of effecting the system they sought by building it WITHIN the current structures, which would remain unchanged yet a mere facade.
https://en.wikipedia.org/wiki/Harry_Cassidy
https://en.wikipedia.org/wiki/Michael_Cassidy_(Canadian_politician)

While I was privy to the NDP alumni obsessed with this treason, I was aware that this idea had infested our political class at all levels.  It is hard to explain the level of duplicity - if not for the occasional but horrifyingly telling outbursts, my family kept their socialist script on point at almost all times.  When it cracked, however, I was terrorized with Stalinist slogans pounded into the dinner table.

To a large extent I have watched this seditious political fraud being constructed my entire life, and it horrifies me.  My refusal to be a part of it saw me driven violently from my home age 15, narrowly avoiding the fate of my little brother, who was forcibly medicated to cover up the incredible psychological damage he had suffered his entire childhood.

While my brother Matthew was criminally forced onto psychiatric medications that destroyed his mental and physical health to the point he poked out his own eyes in their care, my older brother Ben Cassidy and his wife Kim Menard engaged in classic corruption under the shield of our family and then MP Paul Dewar, fixing the contract process at CCOC on Gilmour St in Ottawa for 15+ years, despite my blowing the whistle on their criminal activity in 2009.

Despite notifying media, police and elected officials, nothing was done to even stop this breach of trust, which continued for several years afterward.  When I called Paul Dewar's office directly they were shocked at my story, and wanted to move on it right away.  However, when I told them my name, they hung up the phone.  This is the classic corruption experienced by millions behind the Iron Curtain, right here in our Capital, by a family with deep, long standing political connections.

The phony socialism that my grandfather brought to Canada has destroyed our lives, my family has manipulated several of my partners over the years into getting abortions in the very facilities they legalized and fully funded - a psychotic nightmare I challenge anyone to survive emotionally and spiritually.

This country needs to wake up to the Communism already in force, or we will all be destroyed.  The left I know openly talks of culling the population, re-education camps, and the clinical psychosis represented by the new secular religion of chemical determinism.

My name is Adam Harry Cassidy, and I bear the name of the man who brought this cynical horror to our fair land.  Please help me restore my family name, and return this country to its rightful owners, by forming The New Canadian Republic, and forever binding our values, morals and very souls to the Magna Carta, The US Constitution, and the new founding document we will write that will cement these positive philosophical truths into our culture FOREVER.

God Bless, and God Save Us All.